What would you do if your life hung on a decision made in one moment? Would you stay, or would you go? Which life is the life you were meant to live? Those are some of the questions that Taylor Jenkins Reid explores in her novel, Maybe in Another Life, which tackles young adulthood and love in a charming dual-plot book that follows Hannah Martin in alternating chapters of two lives she could have lived, all based on whether she decided to go home with her best friend or her high school boyfriend.

Hannah Martin is an enjoyable and likable protagonist in both plots, someone that you want to succeed but you also cannot look away from when she fails. She goofs up and makes mistakes and has a dangerous penchant for cinnamon rolls, but that’s all the more reason to love her. Both of her love interests have their merits and while you may prefer one over the other, you’ll see that in the end, it doesn’t really matter whom you prefer because BOTH of them end up being the right man for Hannah. 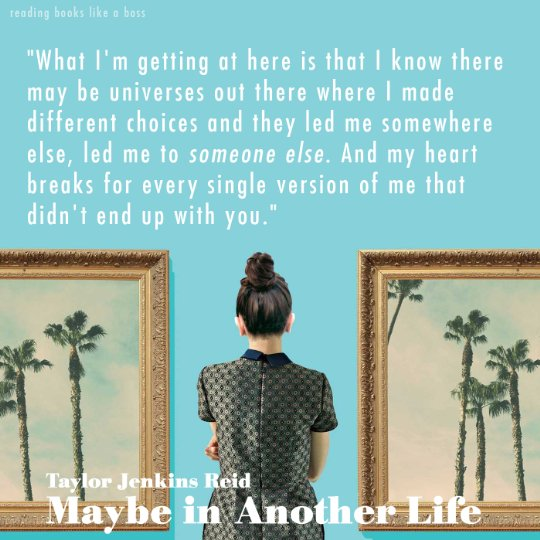 I listened to this as an audio book, and I was a little skeptical because of the alternating timelines, but it actually was very easy to follow! Taylor Jenkins Reid has a fun voice that works very well to translate to audiobooks, and the narrator did an excellent job of bringing Hannah Martin and the other characters in her life to just that, life.
This isn’t some fluffy book about amnesia or alternate realities that you can read and throwaway without thinking again about it. This novel touches on some heavy issues, though in a light-hearted way, including parental separation, miscarriage and pregnancy, cheating spouses, the ethics of patient relationships, and more. You’ll go along for the ride with both Hannahs and be better off for it afterwards. I’m still thinking about this book weeks later, because it really touched something in me. Also, it is such a unique story device that I’m glad isn’t everywhere but I can surely appreciate when done properly, as Jenkins Reid does it!