Today’s author spotlight looks at Shannon Hale, an author I’ve been reading for almost  decade who spans age-range and genre and is sure to delight. I loved her Princess Academy books growing up, and then I adored her Austenland series, which I discovered after seeing the movie. My most recent read by her was The Actor and the Housewife, an adult contemporary book that goes in a totally different direction than you’d expect but is a great book.

Take a look at her ouvre and let me know what your favorite Shannon Hale book to date it! 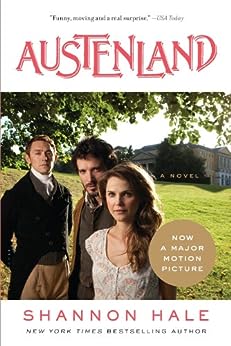 Austenland and Midnight in Austenland

Jane is a young New York woman who can never seem to find the right man-perhaps because of her secret obsession with Mr. Darcy, as played by Colin Firth in the BBC adaptation of Pride and Predjudice. When a wealthy relative bequeaths her a trip to an English resort catering to Austen-obsessed women, however, Jane’s fantasies of meeting the perfect Regency-era gentleman suddenly become more real than she ever could have imagined. Is this total immersion in a fake Austenland enough to make Jane kick the Austen obsession for good, or could all her dreams actually culminate in a Mr. Darcy of her own? 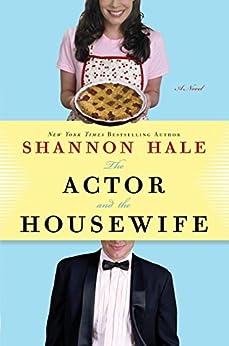 The Actor and the Housewife

Becky is seven months pregnant with her fourth child when she meets her dream actor Felix Callahan by chance. Twelve hours, one elevator ride, and one alcohol-free dinner later something has happened, though nothing has happened… it isn’t sexual. It isn’t even quite love. But soon Felix shows up in the Utah ‘burbs to visit and before they know what’s hit them, Felix and Becky are best friends. Really. Becky’s husband is pretty cool about it. Her children roll their eyes. Her best (girl)friend can’t get her head around it. But Felix (think Colin Firth) and Becky have something special… something unusual, something completely impossible to sustain. Or is it?

Anidori-Kiladra Talianna Isilee, Crown Princess of Kildenree, spends the first years of her life listening to her aunt’s stories and learning the language of the birds, especially the swans. As she grows up, Ani develops the skills of animal speech, but she never feels quite comfortable speaking with people. So when Ani’s mother sends her away to be married in a foreign land, she finds herself at the mercy of her silver-tongued lady in waiting, who leads a mutiny that leaves her alone, destitute, and fleeing for her life. To survive, Ani takes on work as a royal goose girl, hiding in plain sight while she develops her forbidden talents and works to discover her own true, powerful voice.

Book of a Thousand Days

When Lady Saren refuses to marry a man she fears, she and her maid, Dashti, are locked in a tower with just a tiny flap open to the outside world. As food runs low and the weather changes from broiling hot to unbearably cold, it is all Dashti can do to make them comfortable in their dark prison. Not long after their confinement begins, Saren’s suitors arrive-one welcome, the other less so-and she orders Dashti to speak to them. Impersonating Lady Saren is a crime punishable by death, but Dashti will have to play the role many times if she is to save them both from the tower and the dangers outside. As she takes control of their desperate situation, Dashti begins to understand her own astonishing talents and believe that even a low-born maid can find true love.

Miri lives on a mountain where, for generations, her ancestors have lived a simple life. Then word comes that the king’s priests have divined her village the home of the future princess. In a year’s time, the prince will choose his bride from among the village girls. The king’s ministers set up an academy on the mountain, and every teenage girl must attend and learn how to become a princess. Soon Miri finds herself confronted with a harsh academy mistress, bitter competition among the girls, and her own conflicting desires. Winning the contest could give her everything she ever wanted-but it would mean leaving her home and family behind. 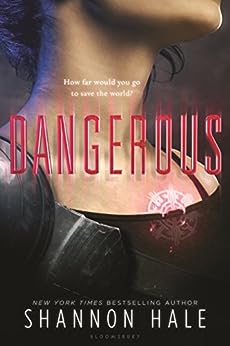 When Maisie Danger Brown nabbed a spot at a NASA-like summer boot camp, she never expected to uncover a conspiracy that would change her life forever. And she definitely didn’t plan to fall in love. But now there’s no going back–Maisie’s the only thing standing between the Earth and annihilation. She must become the hero the world needs. The only problem is: how does a regular girl from Salt Lake City do that, exactly? It’s not as though there’s a handbook for this sort of thing. It’s up to Maisie to come up with a plan–and find the courage to carry it out-before she loses her heart . . . and her life. Equal parts romance and action-adventure, this explosive story is sure to leave both longtime Shannon Hale fans and avid science fiction readers completely breathless.

The Princess in Black Series

Princess Magnolia is having hot chocolate and scones with Duchess Wigtower when . . . Brring! Brring! The monster alarm! A big blue monster is threatening the goats! Stopping monsters is no job for dainty Princess Magnolia. But luckily Princess Magnolia has a secret —she’s also the Princess in Black, and stopping monsters is the perfect job for her! Can the princess sneak away, transform into her alter ego, and defeat the monster before the nosy duchess discovers her secret? From award-winning writing team of Shannon and Dean Hale and illustrator LeUyen Pham, here is the first in a humorous and action-packed chapter book series for young readers who like their princesses not only prim and perfect, but also dressed in black.

Ever After High Series

At Ever After High, an enchanting boarding school, the children of fairytale legends prepare themselves to fulfill their destinies as the next generation of Snow Whites, Prince Charmings and Evil Queens…whether they want to or not. Each year on Legacy Day, students sign the Storybook of Legends to seal their scripted fates. For generations, the Village of Book End has whispered that refusing to sign means The End-both for a story and for a life. As the daughter of the Evil Queen, Raven Queen’s destiny is to follow in her mother’s wicked footsteps, but evil is so not Raven’s style. She’s starting to wonder, what if she rewrote her own story? The royal Apple White, daughter of the Fairest of Them All, has a happy ever after planned for herself, but it depends upon Raven feeding her a poison apple in their future. What if Raven doesn’t sign the Storybook of Legends? It could mean a happily never after for them both.

Shannon and Adrienne have been best friends ever since they were little. But one day, Adrienne starts hanging out with Jen, the most popular girl in class and the leader of a circle of friends called The Group. Everyone in The Group wants to be Jen’s #1, and some girls would do anything to stay on top . . . even if it means bullying others. Now every day is like a roller coaster for Shannon. Will she and Adrienne stay friends? Can she stand up for herself? And is she in The Group―or out?