The author behind our favorite movie, The Devil Wears Prada, is back with a new novel starring one of those characters, Emily, set in Greenwich, Connecticut and sure to delight readers who both love the suburbs and those who can’t even fathom them. On sale June 5th, 2018, When Life Gives You LuLuLemons is sure to reignite an interest in Weisberger’s other works. If you love rich people, society blues, and fashion, check out her other books.

When Life Gives You LuLuLemons

Welcome to Greenwich, CT, where the lawns and the women are perfectly manicured, the Tito’s and sodas are extra strong, and everyone has something to say about the infamous new neighbor.

Let’s be clear: Emily Charlton, Miranda Priestly’s ex-assistant, does not do the suburbs. She’s working in Hollywood as an image consultant to the stars, but recently, Emily’s lost a few clients. She’s hopeless with social media. The new guard is nipping at her heels. She needs a big opportunity, and she needs it now.

Karolina Hartwell is as A-list as they come. She’s the former face of L’Oreal. A mega-supermodel recognized the world over. And now, the gorgeous wife of the newly elected senator from New York, Graham, who also has his eye on the presidency. It’s all very Kennedy-esque, right down to the public philandering and Karolina’s arrest for a DUI—with a Suburban full of other people’s children.

Miriam is the link between them. Until recently she was a partner at one of Manhattan’s most prestigious law firms. But when Miriam moves to Greenwich and takes time off to spend with her children, she never could have predicted that being stay-at-home mom in an uber-wealthy town could have more pitfalls than a stressful legal career.

Emily, Karolina, and Miriam make an unlikely trio, but they desperately need each other. Together, they’ll navigate the social landmines of life in America’s favorite suburb on steroids, revealing the truths—and the lies—that simmer just below the glittering surface. With her signature biting style, Lauren Weisberger offers a dazzling look into another sexy, over-the-top world, where nothing is as it appears. 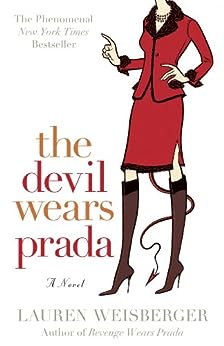 Andrea Sachs, a small-town girl fresh out of college, lands the job “a million girls would die for.” Hired as the assistant to Miranda Priestly, the high-profile, fabulously successful editor of Runway magazine, Andrea finds herself in an office that shouts Prada! Armani! Versace! at every turn, a world populated by impossibly thin, heart-wrenchingly stylish women and beautiful men clad in fine-ribbed turtlenecks and tight leather pants that show off their lifelong dedication to the gym. With breathtaking ease, Miranda can turn each and every one of these hip sophisticates into a scared, whimpering child. The Devil Wears Prada gives a rich and hilarious new meaning to complaints about “The Boss from Hell.” 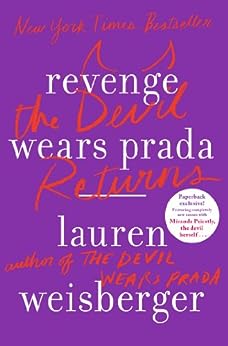 Almost a decade has passed since Andy Sachs quit the job “a million girls would die for” working for Miranda Priestly at Runway magazine—a dream that turned out to be a nightmare. Andy and Emily, her former nemesis and co-assistant, have since joined forces to start a high end bridal magazine, The Plunge, which has quickly become required reading for the young and stylish. Now they get to call all the shots: Andy writes and travels to her heart’s content; Emily plans parties and secures advertising like a seasoned pro. Even better, Andy has met the love of her life. Max Harrison, scion of a storied media family, is confident, successful, and drop-dead gorgeous. Their wedding will be splashed across all the society pages as their friends and family gather to toast the glowing couple. Andy Sachs is on top of the world. But karma’s a bitch. The morning of her wedding, Andy can’t shake the past. And when she discovers a secret letter with crushing implications, her wedding-day jitters turn to cold dread. Andy realizes that nothing—not her husband, nor her beloved career—is as it seems. She never suspected that her efforts to build a bright new life would lead her back to the darkness she barely escaped ten years ago—and directly into the path of the devil herself

How far would you go to reach the top? When America’s sweetheart, Charlotte “Charlie” Silver, makes a pact with the devil—the infamously brutal tennis coach Todd Feltner—she finds herself catapulted into a world of celebrity stylists, private parties, charity matches aboard mega-yachts, and secret dates with Hollywood royalty. Under Todd’s new ruthless regime, Charlie the good girl is out. Todd wants “Warrior Princess” Charlie all the way. After all, no one ever wins big by playing nice. Celebrity mags and gossip blogs go wild for Charlie as she jets around the globe chasing Grand Slam titles and Page Six headlines. But as the Warrior Princess’s star rises on and off the court, it comes at a cost. In a world obsessed with good looks and hot shots, is Charlie Silver willing to lose herself to win it all? 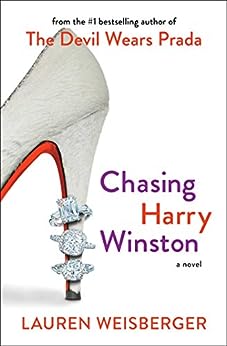 Emmy is newly single, and not by choice. She was this close to the ring and the baby she’s wanted her whole life when her boyfriend left her for his twenty-three-year-old personal trainer — whose fees are paid by Emmy. With her plans for the perfect white wedding in the trash, Emmy is now ordering takeout for one. Her friends insist an around-the-world sex-fueled adventure will solve all her problems — could they be right?

Leigh, a young star in the publishing business, is within striking distance of landing her dream job as senior editor and marrying her dream guy. And to top it all off, she has just purchased her dream apartment. Only when Leigh begins to edit the enfant terrible of the literary world, the brilliant and brooding Jesse Chapman, does she start to notice some cracks in her perfect life…

Adriana is the drop-dead-gorgeous daughter of a famous supermodel. She possesses the kind of feminine wiles made only in Brazil, and she never hesitates to use them. But she’s about to turn thirty and — as her mother keeps reminding her — she won’t have her pick of the men forever. Everyone knows beauty is ephemeral and there’s always someone younger and prettier right around the corner. Suddenly she’s wondering…does Mother know best?

These three very different girls have been best friends for a decade in the greatest city on earth. As they near thirty, they’re looking toward their future…but despite all they’ve earned — first-class travel, career promotions, invites to all the right parties, and luxuries small and large — they’re not quite sure they like what they see. 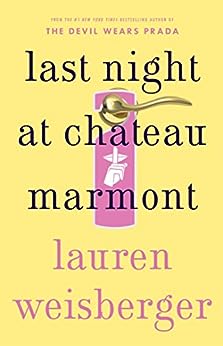 Brooke loved reading the dishy celebrity gossip rag Last Night. That is, until her marriage became a weekly headline. Brooke was drawn to the soulful, enigmatic Julian Alter the very first time she heard him perform “Hallelujah” at a dark East Village dive bar. Now five years married, Brooke balances two jobs—as a nutritionist at NYU Hospital and as a consultant to an Upper East Side girls’ school, where privilege gone wrong and disordered eating run rampant—in order to help support her husband’s dream of making it in the music world. Things are looking up when after years of playing Manhattan clubs and toiling as an A&R intern, Julian finally gets signed by Sony. Although no one’s promising that the album will ever hit the airwaves, Julian is still dedicated to logging in long hours at the recording studio. All that changes after Julian is asked to perform on the Tonight Show with Jay Leno—and is catapulted to stardom, literally overnight. Amazing opportunities begin popping up almost daily—a new designer wardrobe, a tour with Maroon 5, even a Grammy performance. At first the newfound fame is fun—who wouldn’t want to stay at the Chateau Marmont or visit the set of one of television’s hottest shows? Yet it seems that Brooke’s sweet husband—the man who can’t handle hot showers and wears socks to bed—is increasingly absent, even on those rare nights they’re home together. When rumors about Brooke and Julian swirl in the tabloid magazines, she begins to question the truth of her marriage and is forced to finally come to terms with what she thinks she wants—and what she actually needs. 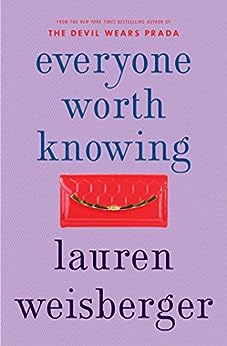 On paper, Bette Robinson’s life is good. At twenty-six, she’s got a great deal on an apartment in Manhattan, and she’s on target to become an associate at the prestigious investment bank where she works with her best friend. Her eighty-hour workweeks might keep her from socializing or dating outside her office walls — but she’s paying her dues on the well-trod path to wealth and happiness. So when Bette quits her job like the impulsive girl she’s never been, she not only shocks her friends and family — she has no idea what to do next.  For months, Bette gets out and about by walking her four-pound dog around her decidedly unglamorous Murray Hill neighborhood. Then she meets Kelly, head of Manhattan’s hottest PR and events planning firm, and suddenly Bette has a brand-new job where the primary requirement is to see and be seen.
The work at Kelly & Company takes Bette inside the VIP rooms of the city’s most exclusive nightclubs, to parties crowded with celebrities and socialites. Bette learns not to blink at the famous faces, the black Amex cards, the magnums of Cristal, or the ruthless paparazzi. Soon she’s dating an infamous playboy who’s great for her career but bad for her sanity — and scaring off the one decent guy she meets. Still, as her coworkers repeatedly point out, how can you complain about a job that pays you to party? Bette has to agree — until she begins appearing in a vicious new gossip column. That’s when Bette’s life on paper takes on a whole new meaning — and she learns the line between her personal and professional lives is…invisible