If you want to learn about Russian history, you want to read Helen Rappaport’s books. She’s a noted Romanov scholar and has written extensively on other historical figures, including Lenin and Queen Victoria. Her latest book about the Romanovs, the famously murdered Russian royal family with ties to the current British Royal family, is on sale June 26th, 2018,and is sure to be a great read for lovers of history, Russia, and when politics becomes personal. If you’re fascinated by stories of Anastasia and Rasputin, Rappaport is the author for you. While she writes nonfiction, she writes with such narrative flair that you’ll be propelled right through.

The Last Days of the Romanovs

Marshaling overlooked evidence from key witnesses such as the British consul to Ekaterinburg, Sir Thomas Preston, American and British travelers in Siberia, and the now-forgotten American journalist Herman Bernstein, Helen Rappaport gives a brilliant account of the political forces swirling through the remote Urals town. She conveys the tension of the watching world: the Kaiser of Germany and George V, King of England―both, like Alexandra, grandchildren of Queen Victoria―their nations locked in combat as the First World War drew to its bitter end. And she draws on recent releases from the Russian archives to challenge the view that the deaths were a unilateral act by a maverick group of the Ekaterinburg Bolsheviks, identifying a chain of command that stretches directly, she believes, to Moscow―and to Lenin himself. Telling the story in a compellingly new and dramatic way, The Last Days of the Romanovs brings those final tragic days vividly alive against the backdrop of Russia in turmoil, on the brink of a devastating civil war.

Victoria: The Heart and Mind of a Young Queen

From the producers of Poldark and Endeavour, ITV’s Victoria follows the early years of the young queen’s reign, based closely on Victoria’s own letters and journals. Now explore this extensive collection in greater depth, and discover who Victoria really was behind her upright public persona. At only eighteen years old, Victoria ascended the throne as a rebellious teenager and gradually grew to become one of the most memorable, unshakeable and powerful women in history. The extensive writings she left behind document this personal journey and show how she triumphed over scandal and corruption. Written by author and Victoria historical consultant, Helen Rappaport, and including a foreword by Daisy Goodwin—acclaimed novelist and scriptwriter of the series—Victoria details the history behind the show. Revealing Victoria’s own thoughts about the love interests, family dramas and court scandals during her early reign, it also delves into the running of the royal household, the upstairs-downstairs relationships, and what it was like to live in Victorian England. Full of beautiful photography from the series and genuine imagery from the era, Victoria takes you behind the palace doors and discover the girl behind the queen.

They were the Princess Dianas of their day―perhaps the most photographed and talked about young royals of the early twentieth century. The four captivating Russian Grand Duchesses―Olga, Tatiana, Maria and Anastasia Romanov―were much admired for their happy dispositions, their looks, the clothes they wore and their privileged lifestyle. Over the years, the story of the four Romanov sisters and their tragic end in a basement at Ekaterinburg in 1918 has clouded our view of them, leading to a mass of sentimental and idealized hagiography. With this treasure trove of diaries and letters from the grand duchesses to their friends and family, we learn that they were intelligent, sensitive and perceptive witnesses to the dark turmoil within their immediate family and the ominous approach of the Russian Revolution, the nightmare that would sweep their world away, and them along with it.

The Race to Save the Romanovs

The murder of the Romanov family in July 1918 horrified the world and its aftershocks still reverberate today. In Putin’s autocratic Russia, the Revolution itself is considered a crime and its anniversary was largely ignored. In stark contrast, the centenary of the massacre of the Imperial Family in Ekaterinburg will be a huge ceremony to be attended by the Patriarch of the Russian Orthodox Church. While the murder itself has received major attention, what has never been investigated in detail are the various plots and plans behind the scenes to save the family―on the part of their royal relatives, other governments, and Russian monarchists loyal to the Tsar. Rappaport refutes the claim that the fault lies entirely with King George V, as has been the traditional claim for the last century. The responsibility for failing the Romanovs must be equally shared. The question of asylum for the Tsar and his family was an extremely complicated issue that presented enormous political, logistical and geographical challenges at a time when Europe was still at war. Like a modern day detective, Helen Rappaport draws on new and never-before-seen sources from archives in the US, Russia, Spain and the UK, creating a powerful account of near misses and close calls with a heartbreaking conclusion. With its up-to-the-minute research, The Race to Save the Romanovs is sure to replace outdated classics as the final word on the fate of the Romanovs. 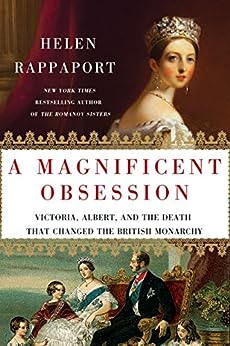 After the untimely death of Prince Albert, the queen and her nation were plunged into a state of grief so profound that this one event would dramatically alter the shape of the British monarchy. For Britain had not just lost a prince: during his twenty year marriage to Queen Victoria, Prince Albert had increasingly performed the function of King in all but name. The outpouring of grief after Albert’s death was so extreme, that its like would not be seen again until the death of Princess Diana 136 years later. Drawing on many letters, diaries and memoirs from the Royal Archives and other neglected sources, as well as the newspapers of the day, Rappaport offers a new perspective on this compelling historical psychodrama—the crucial final months of the prince’s life and the first long, dark ten years of the Queen’s retreat from public view. She draws a portrait of a queen obsessed with her living husband and – after his death – with his enduring place in history. Magnificent Obsession will also throw new light on the true nature of the prince’s chronic physical condition, overturning for good the 150-year old myth that he died of typhoid fever.

Caught in the Revolution

Between the first revolution in February 1917 and Lenin’s Bolshevik coup in October, Petrograd (the former St Petersburg) was in turmoil – felt nowhere more keenly than on the fashionable Nevsky Prospekt. There, the foreign visitors who filled hotels, clubs, offices and embassies were acutely aware of the chaos breaking out on their doorsteps and beneath their windows. Among this disparate group were journalists, diplomats, businessmen, bankers, governesses, volunteer nurses and expatriate socialites. Many kept diaries and wrote letters home: from an English nurse who had already survived the sinking of the Titanic; to the black valet of the US Ambassador, far from his native Deep South; to suffragette leader Emmeline Pankhurst, who had come to Petrograd to inspect the indomitable Women’s Death Battalion led by Maria Bochkareva. Helen Rappaport draws upon this rich trove of material, much of it previously unpublished, to carry us right up to the action – to see, feel and hear the Revolution as it happened to an assortment of individuals who suddenly felt themselves trapped in a “red madhouse.” 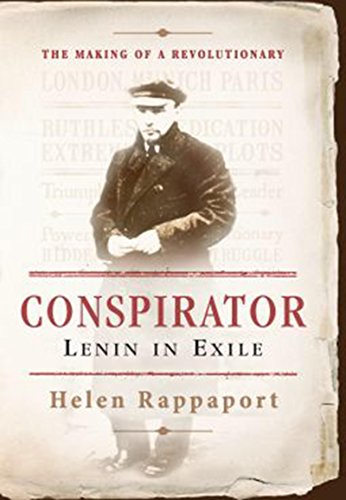 The father of Communist Russia, Vladimir Ilych Lenin now seems to have emerged fully formed in the turbulent wake of WorldWar I and the Russian Revolution. But Lenin’s character was in fact forged much earlier, over the course of years spent in exile, constantly on the move, and in disguise. In Conspirator, Russian historian Helen Rappaport narrates the compelling story of Lenin’s life and political activities in the years leading up to the revolution. As he scuttled between the glittering capital cities of Europe—from London and Munich to Vienna and Prague—Lenin found support among fellow émigrés and revolutionaries in the underground movement. He came to lead a ring of conspirators, many of whom would give their lives in service to his schemes. A riveting account of Lenin’s little-known early life, Conspirator tracks in gripping detail the formation of one of the great revolutionaries of the twentieth century.