No one does biography quite like Walter Isaacson. There is a reason he’s a consistent New York Times bestseller. If you want to read about geniuses throughout history, you want to pick up one of Walter Isaacson’s books. I look forward to seeing what subject he will tackle next, and hopefully a woman is in the future. I’d love an Isaacson biography on someone like Marie Curie, Grace Hopper, or Ada Lovelace. They seem right in his wheelhouse.

Based on thousands of pages from Leonardo’s astonishing notebooks and new discoveries about his life and work, Walter Isaacson weaves a narrative that connects his art to his science. He shows how Leonardo’s genius was based on skills we can improve in ourselves, such as passionate curiosity, careful observation, and an imagination so playful that it flirted with fantasy.

Einstein: His Life and Universe

How did his mind work? What made him a genius? Isaacson’s biography shows how his scientific imagination sprang from the rebellious nature of his personality. His fascinating story is a testament to the connection between creativity and freedom. Based on newly released personal letters of Einstein, this book explores how an imaginative, impertinent patent clerk—a struggling father in a difficult marriage who couldn’t get a teaching job or a doctorate—became the mind reader of the creator of the cosmos, the locksmith of the mysteries of the atom, and the universe. His success came from questioning conventional wisdom and marveling at mysteries that struck others as mundane. This led him to embrace a morality and politics based on respect for free minds, free spirits, and free individuals. These traits are just as vital for this new century of globalization, in which our success will depend on our creativity, as they were for the beginning of the last century, when Einstein helped usher in the modern age.

Based on more than forty interviews with Jobs conducted over two years—as well as interviews with more than a hundred family members, friends, adversaries, competitors, and colleagues—Walter Isaacson has written a riveting story of the roller-coaster life and searingly intense personality of a creative entrepreneur whose passion for perfection and ferocious drive revolutionized six industries: personal computers, animated movies, music, phones, tablet computing, and digital publishing. At a time when America is seeking ways to sustain its innovative edge, and when societies around the world are trying to build digital-age economies, Jobs stands as the ultimate icon of inventiveness and applied imagination. He knew that the best way to create value in the twenty-first century was to connect creativity with technology. He built a company where leaps of the imagination were combined with remarkable feats of engineering.   Although Jobs cooperated with this book, he asked for no control over what was written nor even the right to read it before it was published. He put nothing off-limits. He encouraged the people he knew to speak honestly. And Jobs speaks candidly, sometimes brutally so, about the people he worked with and competed against.

Benjamin Franklin is the founding father who winks at us, the one who seems made of flesh rather than marble. In a sweeping narrative that follows Franklin’s life from Boston to Philadelphia to London and Paris and back, Walter Isaacson chronicles the adventures of the runaway apprentice who became, over the course of his eighty-four-year life, America’s best writer, inventor, media baron, scientist, diplomat, and business strategist, as well as one of its most practical and ingenious political leaders. He explores the wit behind Poor Richard’s Almanac and the wisdom behind the Declaration of Independence, the new nation’s alliance with France, the treaty that ended the Revolution, and the compromises that created a near-perfect Constitution. In this colorful and intimate narrative, Isaacson provides the full sweep of Franklin’s amazing life, showing how he helped to forge the American national identity and why he has a particular resonance in the twenty-first century.

The Innovators: How a Group of Hackers, Geniuses, and Geeks Created the Digital Revolution

What were the talents that allowed certain inventors and entrepreneurs to turn their visionary ideas into disruptive realities? What led to their creative leaps? Why did some succeed and others fail? The Innovators is a masterly saga of collaborative genius destined to be the standard history of the digital revolution—and an indispensable guide to how innovation really happens. Isaacson begins the adventure with Ada Lovelace, Lord Byron’s daughter, who pioneered computer programming in the 1840s. He explores the fascinating personalities that created our current digital revolution, such as Vannevar Bush, Alan Turing, John von Neumann, J.C.R. Licklider, Doug Engelbart, Robert Noyce, Bill Gates, Steve Wozniak, Steve Jobs, Tim Berners-Lee, and Larry Page.

The Wise Men: Six Friends and the World They Made

A captivating blend of personal biography and public drama, The Wise Men introduces the original best and brightest, leaders whose outsized personalities and actions brought order to postwar chaos: Averell Harriman, the freewheeling diplomat and Roosevelt’s special envoy to Churchill and Stalin; Dean Acheson, the secretary of state who was more responsible for the Truman Doctrine than Truman and for the Marshall Plan than General Marshall; George Kennan, self-cast outsider and intellectual darling of the Washington elite; Robert Lovett, assistant secretary of war, undersecretary of state, and secretary of defense throughout the formative years of the Cold War; John McCloy, one of the nation’s most influential private citizens; and Charles Bohlen, adroit diplomat and ambassador to the Soviet Union. 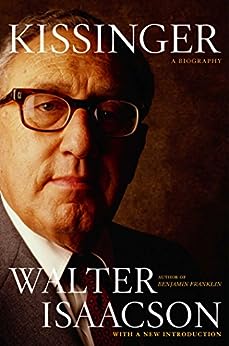 By the time Henry Kissinger was made secretary of state in 1973, he had become, according to the Gallup Poll, the most admired person in America and one of the most unlikely celebrities ever to capture the world’s imagination. Yet Kissinger was also reviled by large segments of the American public, ranging from liberal intellectuals to conservative activists. Kissinger explores the relationship between this complex man’s personality and the foreign policy he pursued. Drawing on extensive interviews with Kissinger as well as 150 other sources, including U.S. presidents and his business clients, this first full-length biography makes use of many of Kissinger’s private papers and classified memos to tell his uniquely American story. The result is an intimate narrative, filled with surprising revelations, that takes this grandly colorful statesman from his childhood as a persecuted Jew in Nazi Germany, through his tortured relationship with Richard Nixon, to his later years as a globe-trotting business consultant. 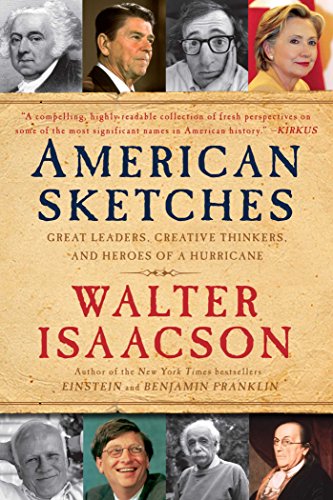 What are the roots of creativity? What makes for great leadership? How do influential people end up rippling the surface of history?  In this collection of essays, Walter Isaacson reflects on the lessons to be learned from Benjamin Franklin, Albert Einstein, Bill Gates, Henry Kissinger, Ronald Reagan and Mikhail Gorbachev, Hillary Clinton and Bill Clinton, and various other interesting characters he has chronicled as a biographer and journalist. The people he writes about have an awesome intelligence, in most cases, but that is not the secret of their success. They had qualities that were even more rare, such as imagination and true curiosity.