Ally Carter is the queen of spies, double agents, heists, and high society. Her books and series are beloved by so many young adult readers and her latest book, a standalone, has reminded the world how much we adored her earlier series. I remember binge-reading the Gallagher Girls series in high school and remarking on how different it was from so many other YA books. It’s about a teenage girl who does things other than crush on boys but does that too, though in a different way than you might expect. I loved the series, to say the least. In celebration of her new standalone, which I also really enjoyed, check out here complete works below. 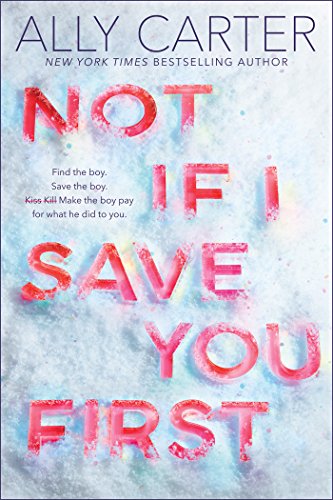 Not If I Save You First

Maddie thought she and Logan would be friends forever. But when your dad is a Secret Service agent and your best friend is the president’s son, sometimes life has other plans. Before she knows it, Maddie’s dad is dragging her to a cabin in the middle of the Alaskan wilderness. No phone.No Internet. And not a single word from Logan. Maddie tells herself it’s okay. After all, she’s the most popular girl for twenty miles in any direction. She has wood to cut and weapons to bedazzle. Her life is full. Until Logan shows up six years later . . .And Maddie wants to kill him.  But before that can happen, an assailant appears out of nowhere, knocking Maddie off a cliff and dragging Logan to some unknown fate. Maddie knows she could turn back- and get help. But the weather is turning and the terrain will only get more treacherous, the animals more deadly.  Maddie still really wants to kill Logan.  But she has to save him first.

Cammie Morgan is a student at the Gallagher Academy for Exceptional Young Women, a fairly typical all-girls school-that is, if every school taught advanced martial arts in PE and the latest in chemical warfare in science, and students received extra credit for breaking CIA codes in computer class. The Gallagher Academy might claim to be a school for geniuses but it’s really a school for spies. Even though Cammie is fluent in fourteen languages and capable of killing a man in seven different ways, she has no idea what to do when she meets an ordinary boy who thinks she’s an ordinary girl. Sure, she can tap his phone, hack into his computer, or track him through town with the skill of a real “pavement artist”-but can she maneuver a relationship with someone who can never know the truth about her?

For as long as she can remember, Katarina has been a part of the family business-thieving. When Kat tries to leave “the life” for a normal life, her old friend Hale conspires to bring her back into the fold. Why? A mobster’s art collection has been stolen, and Kat’s father is the only suspect. Caught between Interpol and a far more deadly enemy, Kat’s dad needs her help.

1. She is not crazy.
2. Her mother was murdered.
3. Someday she is going to find the killer and make him pay.

As certain as Grace is about these facts, nobody else believes her — so there’s no one she can completely trust. Not her grandfather, a powerful ambassador. Not her new friends, who all live on Embassy Row. Not Alexei, the Russian boy next door, who is keeping his eye on Grace for reasons she neither likes nor understands. Everybody wants Grace to put on a pretty dress and a pretty smile, blocking out all her unpretty thoughts. But they can’t control Grace — no more than Grace can control what she knows or what she needs to do. Her past has come back to hunt her . . . and if she doesn’t stop it, Grace isn’t the only one who will get hurt. Because on Embassy Row, the countries of the world stand like dominoes, and one wrong move can make them all fall down.

Self-help guru Julia James has made a successful living as an advocate for the single life, until just as her latest book is about to hit the bookstores, gossip linking her to a gorgeous actor hits the tabloids, ruining her credibility.