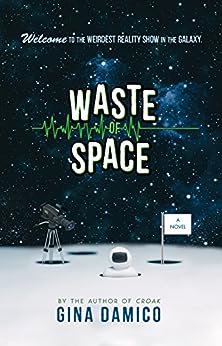 Waste of Space by Gina Damico

Cram ten hormonal teens into a spaceship and blast off: that’s the premise for the ill-conceived reality show Waste of Space. The kids who are cast know everything about drama—and nothing about the fact that the production is fake. Hidden in a desert warehouse, their spaceship replica is equipped with state-of-the-art special effects dreamed up by the scientists partnering with the shady cable network airing the show. And it’s a hit! Millions of viewers are transfixed. But then, suddenly, all communication is severed. Trapped and paranoid, the kids must figure out what to do when this reality show loses its grip on reality. 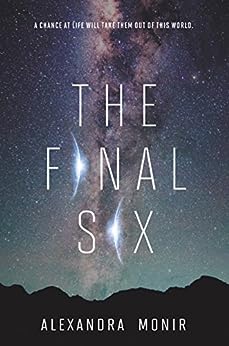 The Final Six by Alexandra Monir

When Leo and Naomi are drafted, along with twenty-two of the world’s brightest teenagers, into the International Space Training Camp, their lives are forever changed. Overnight, they become global celebrities in contention for one of the six slots to travel to Europa—Jupiter’s moon—and establish a new colony, leaving their planet forever. With Earth irreparably damaged, the future of the human race rests on their shoulders.For Leo, an Italian championship swimmer, this kind of purpose is a reason to go on after losing his family. But Naomi, an Iranian-American science genius, is suspicious of the ISTC and the fact that a similar mission failed under mysterious circumstances, killing the astronauts onboard. She fears something equally sinister awaiting the Final Six beneath Europa’s surface. In this cutthroat atmosphere, surrounded by strangers from around the world, Naomi finds an unexpected friend in Leo. As the training tests their limits, Naomi and Leo’s relationship deepens with each life-altering experience they encounter. But it’s only when the finalists become fewer and their destinies grow nearer that the two can fathom the full weight of everything at stake: the world, the stars, and their lives.

A century ago, the Sentience Wars tore the galaxy apart and nearly ended the entire concept of intelligent space-faring life. In the aftermath, a curious tradition was invented—something to cheer up everyone who was left and bring the shattered worlds together in the spirit of peace, unity, and understanding. Once every cycle, the great galactic civilizations gather for the Metagalactic Grand Prix—part gladiatorial contest, part beauty pageant, part concert extravaganza, and part continuation of the wars of the past. Species far and wide compete in feats of song, dance and/or whatever facsimile of these can be performed by various creatures who may or may not possess, in the traditional sense, feet, mouths, larynxes, or faces. And if a new species should wish to be counted among the high and the mighty, if a new planet has produced some savage group of animals, machines, or algae that claim to be, against all odds, sentient? Well, then they will have to compete. And if they fail? Sudden extermination for their entire species. This year, though, humankind has discovered the enormous universe. And while they expected to discover a grand drama of diplomacy, gunships, wormholes, and stoic councils of aliens, they have instead found glitter, lipstick, and electric guitars. Mankind will not get to fight for its destiny—they must sing. Decibel Jones and the Absolute Zeroes have been chosen to represent their planet on the greatest stage in the galaxy. And the fate of Earth lies in their ability to rock. 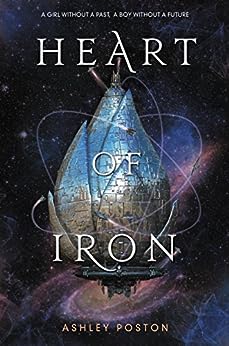 Heart of Iron by Ashley Poston

Seventeen-year-old Ana is a scoundrel by nurture and an outlaw by nature. Found as a child drifting through space with a sentient android called D09, Ana was saved by a fearsome space captain and the grizzled crew she now calls family. But D09—one of the last remaining illegal Metals—has been glitching, and Ana will stop at nothing to find a way to fix him. Ana’s desperate effort to save D09 leads her on a quest to steal the coordinates to a lost ship that could offer all the answers. But at the last moment, a spoiled Ironblood boy beats Ana to her prize. He has his own reasons for taking the coordinates, and he doesn’t care what he’ll sacrifice to keep them. When everything goes wrong, she and the Ironblood end up as fugitives on the run. Now their entire kingdom is after them—and the coordinates—and not everyone wants them captured alive. What they find in a lost corner of the universe will change all their lives—and unearth dangerous secrets. But when a darkness from Ana’s past returns, she must face an impossible choice: does she protect a kingdom that wants her dead or save the Metal boy she loves? 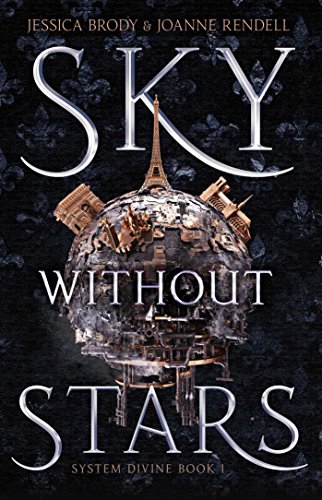 When the Last Days came, the planet of Laterre promised hope. A new life for a wealthy French family and their descendants. But five hundred years later, it’s now a place where an extravagant elite class reigns supreme; where the clouds hide the stars and the poor starve in the streets; where a rebel group, long thought dead, is resurfacing. Whispers of revolution have begun—a revolution that hinges on three unlikely heroes…
Chatine is a street-savvy thief who will do anything to escape the brutal Regime, including spy on Marcellus, the grandson of the most powerful man on the planet. Marcellus is an officer—and the son of a renowned traitor. In training to take command of the military, Marcellus begins to doubt the government he’s vowed to serve when his father dies and leaves behind a cryptic message that only one person can read: a girl named Alouette. Alouette is living in an underground refuge, where she guards and protects the last surviving library on the planet. But a shocking murder will bring Alouette to the surface for the first time in twelve years…and plunge Laterre into chaos. All three have a role to play in a dangerous game of revolution—and together they will shape the future of a planet. Power, romance, and destiny collide in this sweeping reimagining of Victor Hugo’s masterpiece, Les Misérables. 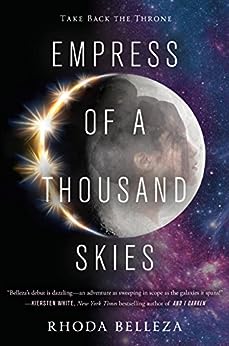 Empress of a Thousand Skies by Rhoda Bellezza

Rhee, also known as Crown Princess Rhiannon Ta’an, is the sole surviving heir to a powerful dynasty. She’ll stop at nothing to avenge her family and claim her throne.
Aly has risen above his war refugee origins to find fame as the dashing star of a DroneVision show. But when he’s falsely accused of killing Rhee, he’s forced to prove his innocence to save his reputation – and his life. With planets on the brink of war, Rhee and Aly must confront a ruthless evil that threatens the fate of the entire galaxy.
Rhoda Belleza crafts a powerful saga of vengeance, warfare, and the true meaning of legacy in this exhilarating debut, perfect for readers of Marissa Meyer’s Lunar Chronicles and Jay Kristoff and Amie Kaufman’s Illuminae Files. 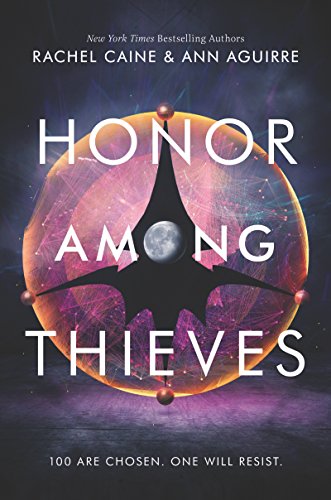 Honor Among Thieves by Rachel Caine and Ann Aguirre

Petty criminal Zara Cole has a painful past that’s made her stronger than most, which is why she chose life in New Detroit instead moving with her family to Mars. In her eyes, living inside a dome isn’t much better than a prison cell. Still, when Zara commits a crime that has her running scared, jail might be exactly where she’s headed. Instead Zara is recruited into the Honors, an elite team of humans selected by the Leviathan—a race of sentient alien ships—to explore the outer reaches of the universe as their passengers. Zara seizes the chance to flee Earth’s dangers, but when she meets Nadim, the alien ship she’s assigned, Zara starts to feel at home for the first time. But nothing could have prepared her for the dark, ominous truths that lurk behind the alluring glitter of starlight. 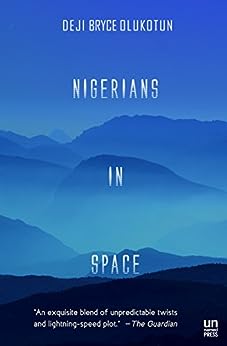 1993. Houston. Dr. Wale Olufunmi, lunar rock geologist, has a life most Nigerian immigrants would kill for, but then most Nigerians aren’t Wale—a great scientific mind in exile with galactic ambitions. Then comes an outlandish order: steal a piece of the moon. With both personal and national glory at stake, Wale manages to pull off the near impossible, setting out on a journey back to Nigeria that leads anywhere but home. Compelled by Wale’s impulsive act, Nigerians traces arcs in time and space from Houston to Stockholm, from Cape Town to Bulawayo, picking up on the intersecting lives of a South African abalone smuggler, a freedom fighter’s young daughter, and Wale’s own ambitious son. Deji Olukotun’s debut novel defies categorization—a story of international intrigue that tackles deeper questions about exile, identity, and the need to answer an elusive question: what exactly is brain gain?