In honor of the release of What If It’s Us by YA King and Queen Adam Silvera and Becky Albertalli, I wanted to spotlight Adam Silvera. I hadn’t read anything by him before WIIU but I absolutely devoured the book and immediately decided to read his other books, which I actually had on my kindle from past deals. He writes some really gut-wrenching romances and does YA so well.

Here are his complete works: 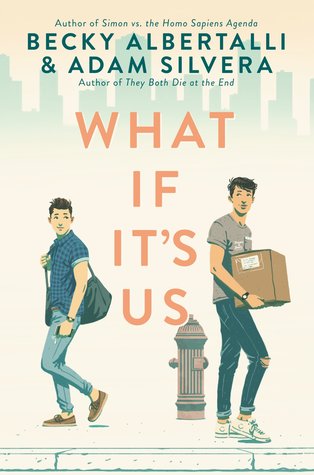 What If It’s Us

ARTHUR is only in New York for the summer, but if Broadway has taught him anything, it’s that the universe can deliver a showstopping romance when you least expect it. BEN thinks the universe needs to mind its business. If the universe had his back, he wouldn’t be on his way to the post office carrying a box of his ex-boyfriend’s things. But when Arthur and Ben meet-cute at the post office, what exactly does the universe have in store for them . . . ? Maybe nothing. After all, they get separated. Maybe everything. After all, they get reunited. But what if they can’t nail a first date even after three do-overs? What if Arthur tries too hard to make it work and Ben doesn’t try hard enough? What if life really isn’t like a Broadway play? But what if it is? What if it’s us?

They Both Die at the End

On September 5, a little after midnight, Death-Cast calls Mateo Torrez and Rufus Emeterio to give them some bad news: They’re going to die today. Mateo and Rufus are total strangers, but, for different reasons, they’re both looking to make a new friend on their End Day. The good news: There’s an app for that. It’s called the Last Friend, and through it, Rufus and Mateo are about to meet up for one last great adventure—to live a lifetime in a single day.

History Is All You Left Me

When Griffin’s first love and ex-boyfriend, Theo, dies in a drowning accident, his universe implodes. Even though Theo had moved to California for college and started seeing Jackson, Griffin never doubted Theo would come back to him when the time was right. But now, the future he’s been imagining for himself has gone far off course. To make things worse, the only person who truly understands his heartache is Jackson. But no matter how much they open up to each other, Griffin’s downward spiral continues. He’s losing himself in his obsessive compulsions and destructive choices, and the secrets he’s been keeping are tearing him apart. If Griffin is ever to rebuild his future, he must first confront his history, every last heartbreaking piece in the puzzle of his life.

More Happy Than Not

In the months after his father’s suicide, it’s been tough for sixteen-year-old Aaron Soto to find happiness again—but he’s still gunning for it. With the support of his girlfriend Genevieve and his overworked mom, he’s slowly remembering what that might feel like. But grief and the smile-shaped scar on his wrist prevent him from forgetting completely.
When Genevieve leaves for a couple of weeks, Aaron spends all his time hanging out with this new guy, Thomas. Aaron’s crew notices, and they’re not exactly thrilled. But Aaron can’t deny the happiness Thomas brings or how Thomas makes him feel safe from himself, despite the tensions their friendship is stirring with his girlfriend and friends. Since Aaron can’t stay away from Thomas or turn off his newfound feelings for him, he considers turning to the Leteo Institute’s revolutionary memory-alteration procedure to straighten himself out, even if it means forgetting who he truly is.  Why does happiness have to be so hard?