Ian McEwan is one of my favorite authors and I am always fascinated to see the movie adaptations of his novels. Atonement obviously brought Saoirse Ronan onto the scene, and now she’s back in the adaptation of On Chesil Beach, which I am excited to see. while we all know Atonement, one of my favorite McEwan books is actually Sweet Tooth. What about yours?

Also, McEwan’s next book, Machines Like Me, comes out in April of 2019, and here’s the blurb:

Machines Like Me occurs in an alternative 1980s London. Britain has lost the Falklands War, Margaret Thatcher battles Tony Benn for power, and Alan Turing achieves a breakthrough in artificial intelligence. In a world not quite like this one, two lovers will be tested beyond their understanding.
Charlie, drifting through life and dodging full-time employment, is in love with Miranda, a bright student who lives with a terrible secret. When Charlie comes into money, he buys Adam, one of the first batch of synthetic humans. With Miranda’s assistance, he co-designs Adam’s personality. This near-perfect human is beautiful, strong, and clever—a love triangle soon forms. These three beings will confront a profound moral dilemma.

Trudy has been unfaithful to her husband, John. What’s more, she has kicked him out of their marital home, a valuable old London town house, and in his place is his own brother, the profoundly banal Claude. The illicit couple have hatched a scheme to rid themselves of her inconvenient husband forever. But there is a witness to their plot: the inquisitive, nine-month-old resident of Trudy’s womb.  As Trudy’s unborn son listens, bound within her body, to his mother and his uncle’s murderous plans, he gives us a truly new perspective on our world, seen from the confines of his. McEwan’s brilliant recasting of Shakespeare lends new weight to the age-old question of Hamlet’s hesitation, and is a tour de force of storytelling

On a hot summer day in 1935, thirteen-year-old Briony Tallis witnesses a moment’s flirtation between her older sister, Cecilia, and Robbie Turner, the son of a servant and Cecilia’s childhood friend. But Briony’ s incomplete grasp of adult motives–together with her precocious literary gifts–brings about a crime that will change all their lives. As it follows that crime’s repercussions through the chaos and carnage of World War II and into the close of the twentieth century, Atonement engages the reader on every conceivable level, with an ease and authority that mark it as a genuine masterpiece. 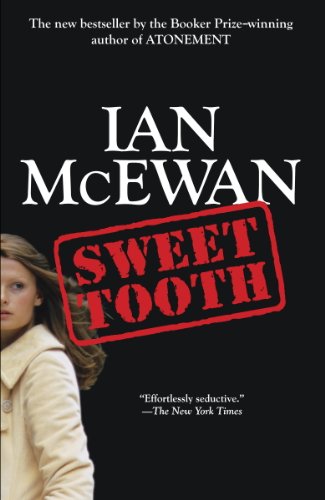 Cambridge student Serena Frome’s beauty and intelligence make her the ideal recruit for MI5. The year is 1972. The Cold War is far from over. England’s legendary intelligence agency is determined to manipulate the cultural conversation by funding writers whose politics align with those of the government. The operation is code named “Sweet Tooth.”
Serena, a compulsive reader of novels, is the perfect candidate to infiltrate the literary circle of a promising young writer named Tom Haley. At first, she loves his stories. Then she begins to love the man. How long can she conceal her undercover life? To answer that question, Serena must abandon the first rule of espionage: trust no one. 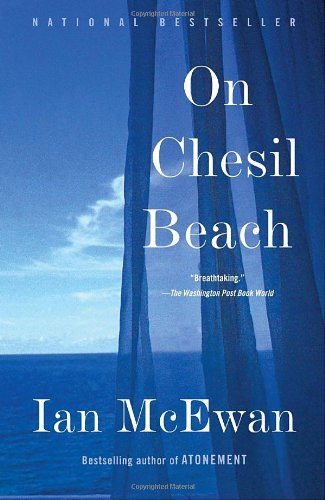 It is 1962, and Florence and Edward are celebrating their wedding in a hotel on the Dorset coast. Yet as they dine, the expectation of their marital duties become overwhelming. Unbeknownst to them both, the decisions they make this night will resonate throughout their lives. With exquisite prose, Ian McEwan creates in On Chesil Beach a story of lives transformed by a gesture not made or a word not spoken 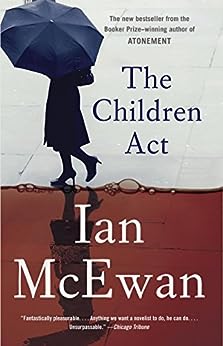 Fiona Maye is a leading High Court judge who presides over cases in the family division. She is renowned for her fierce intelligence, exactitude, and sensitivity. But her professional success belies private sorrow and domestic strife. There is the lingering regret of her childlessness, and now her marriage of thirty years is in crisis. At the same time, she is called on to try an urgent case: Adam, a beautiful seventeen-year-old boy, is refusing for religious reasons the medical treatment that could save his life, and his devout parents echo his wishes. Time is running out. Should the secular court overrule sincerely expressed faith? In the course of reaching a decision, Fiona visits Adam in the hospital—an encounter that stirs long-buried feelings in her and powerful new emotions in the boy. Her judgment has momentous consequences for them both. 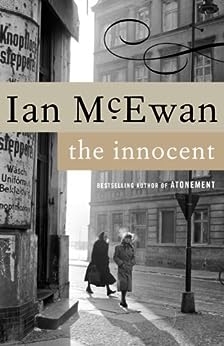 A member of a British-American surveillance team in Cold War Berlin finds himself in too deep in this masterful work from the author of Atonement. Twenty-five-year-old Leonard Marnham’s intelligence work—tunneling under a Russian communications center to tap the phone lines to Moscow—offers him a welcome opportunity to begin shedding his own unwanted innocence, even if he is only a bit player in a grim international comedy of errors. His relationship with Maria Eckdorf, an enigmatic and beautiful West Berliner, likewise promises to loosen the bonds of his ordinary life. But the promise turns to horror in the course of one terrible evening—a night when Marnham learns just how much of his innocence he’s willing to shed. 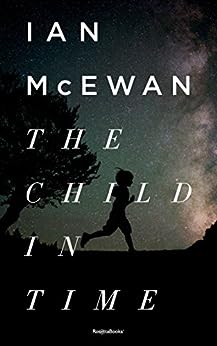 The Child in Time

The Child in Time shows us just how quickly life can change in an instant. Stephen Lewis is a successful author of children’s books. It is a routine Saturday morning and while on a trip to the supermarket, Stephen gets distracted. Within moments, his daughter is kidnapped and his life is forever changed. From that moment, Lewis spirals into bereavement that has effects on his relationship with his wife, his psyche, and with time itself: “It was a wonder there could be so much movement, so much purpose, all the time. He himself had none.” 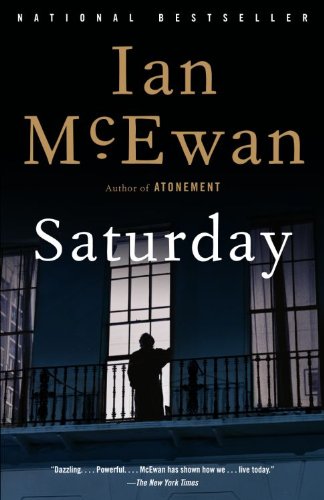 Ian McEwan, the bestselling author of Atonement, follows an ordinary man through a Saturday whose high promise gradually turns nightmarish. Henry Perowne–a neurosurgeon, urbane, privileged, deeply in love with his wife and grown-up children–plans to play a game of squash, visit his elderly mother, and cook dinner for his family. But after a minor traffic accident leads to an unsettling confrontation, Perowne must set aside his plans and summon a strength greater than he knew he had in order to preserve the life that is dear to him. 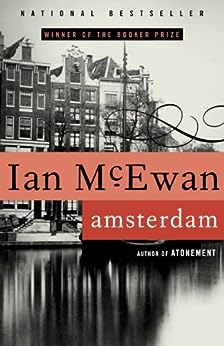 On a chilly February day, two old friends meet in the throng outside a London crematorium to pay their last respects to Molly Lane. Both Clive Linley and Vernon Halliday had been Molly’s lovers in the days before they reached their current eminence: Clive is Britain’s most successful modern composer, and Vernon is a newspaper editor. Gorgeous, feisty Molly had other lovers, too, notably Julian Garmony, Foreign Secretary, a notorious right-winger tipped to be the next prime minister. In the days that follow Molly’s funeral, Clive and Vernon will make a pact with consequences that neither could have foreseen…

The calm, organized life of science writer Joe Rose is shattered when he sees a man die in a freak hot-air balloon accident. A stranger named Jed Parry joins Rose in helping to bring the balloon to safety, but unknown to Rose, something passes between Parry and himself on that day—something that gives birth to an obsession in Parry so powerful that it will test the limits of Rose’s beloved rationalism, threaten the love of his wife, Clarissa, and drive him to the brink of murder and madness. From the Booker Prize-winning author of Atonement, here is a brilliant and compassionate novel of love, faith, and suspense, and of how life can change in an instant. 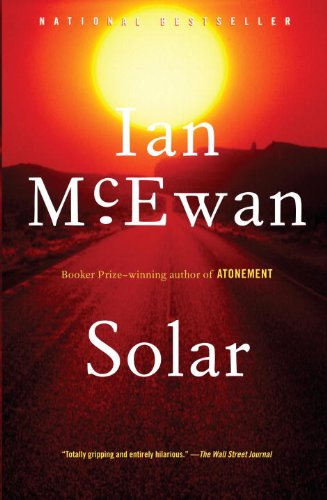 Dr. Michael Beard’s best work is behind him. Trading on his reputation, he speaks for enormous fees, lends his name to the letterheads of renowned scientific institutions, and halfheartedly heads a government-backed initiative tackling global warming. Meanwhile, Michael’s fifth marriage is floundering due to his incessant womanizing. When his professional and personal worlds collide in a freak accident, an opportunity presents itself for Michael to extricate himself from his marital problems, reinvigorate his career, and save the world from environmental disaster. But can a man who has made a mess of his life clean up the messes of humanity? 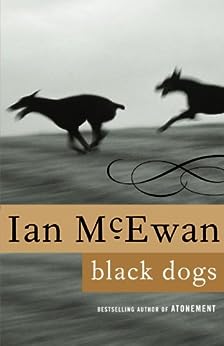 Set in late 1980s Europe at the time of the fall of the Berlin Wall, Black Dogs is the intimate story of the crumbling of a marriage, as witnessed by an outsider. Jeremy is the son-in-law of Bernard and June Tremaine, whose union and estrangement began almost simultaneously. Seeking to comprehend how their deep love could be defeated by ideological differences Bernard and June cannot reconcile, Jeremy undertakes writing June’s memoirs, only to be led back again and again to one terrifying encouner forty years earlier—a moment that, for June, was as devastating and irreversible in its consequences as the changes sweeping Europe in Jeremy’s own time. In a finely crafted, compelling examination of evil and grace, Ian McEwan weaves the sinister reality of civiliation’s darkest moods—its black dogs—with the tensions that both create love and destroy it.