The huge, thousand-plus page ARC of The Priory of the Orange Tree has been one of the most requested ARCs this past year, and now, it’s finally out in the real world for everyone to read. To celebrate, let’s look back on Samantha Shannon’s other work.

The Priory of the Orange Tree

The House of Berethnet has ruled Inys for a thousand years. Still unwed, Queen Sabran the Ninth must conceive a daughter to protect her realm from destruction–but assassins are getting closer to her door.

Ead Duryan is an outsider at court. Though she has risen to the position of lady-in-waiting, she is loyal to a hidden society of mages. Ead keeps a watchful eye on Sabran, secretly protecting her with forbidden magic.

Across the dark sea, Tané has trained all her life to be a dragonrider, but is forced to make a choice that could see her life unravel.

Meanwhile, the divided East and West refuse to parley, and forces of chaos are rising from their sleep. 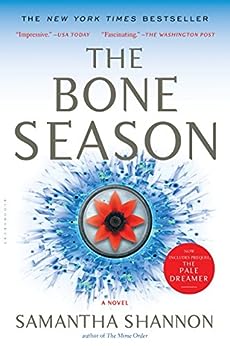 The Bone Season Series (3 books and many novellas)

In 2059, Scion has taken over most of the world’s cities, promising safety for all the citizens it deems worthy and wiping out clairvoyants wherever it can find them.

Paige Mahoney, though, is a clairvoyant–and a criminal just for existing. Paige is determined to fight Scion’s power, and as part of the Seven Seals, Paige has found a use for her powers: she scouts for information by breaking into others’ minds as they dream.

But when Paige is captured and arrested, she encounters a power more sinister even than Scion. The voyant prison is a separate city, controlled by a powerful, otherworldly race. These creatures, the Rephaim, value the voyants highly-as soldiers in their army.

Paige is assigned to a Rephaite keeper, Warden, who will be in charge of her care and training. He is her master. Her natural enemy. But if she wants to regain her freedom, Paige will have to learn something of his mind and his own mysterious motives.

The Bone Season introduces a compelling heroine-a young woman learning to harness her powers in a world where everything has been taken from her. It also introduces an extraordinary young writer, with huge ambition and a teeming imagination. Samantha Shannon has created a bold new reality in this riveting debut.