Last week one of my favorite authors released her new book, so I wanted to take today to highlight the other books she has out! Sandhya Menon’s books are cinnamon rolls of sweetness and strong female characters and I love love love her. I got to see her at a book talk last year and was just amazed.

Now that the world as been introduced to Sweetie, let’s take a look back at Dimple and Twinkle as well!

There’s Something About Sweetie

Ashish Patel didn’t know love could be so…sucky. After being dumped by his ex-girlfriend, his mojo goes AWOL. Even worse, his parents are annoyingly, smugly confident they could find him a better match. So, in a moment of weakness, Ash challenges them to set him up. The Patels insist that Ashish date an Indian-American girl—under contract. Per subclause 1(a), he’ll be taking his date on “fun” excursions like visiting the Hindu temple and his eccentric Gita Auntie. Kill him now. How is this ever going to work? Sweetie Nair is many things: a formidable track athlete who can outrun most people in California, a loyal friend, a shower-singing champion. Oh, and she’s also fat. To Sweetie’s traditional parents, this last detail is the kiss of death. Sweetie loves her parents, but she’s so tired of being told she’s lacking because she’s fat. She decides it’s time to kick off the Sassy Sweetie Project, where she’ll show the world (and herself) what she’s really made of. Ashish and Sweetie both have something to prove. But with each date they realize there’s an unexpected magic growing between them. Can they find their true selves without losing each other?

Dimple Shah has it all figured out. With graduation behind her, she’s more than ready for a break from her family, from Mamma’s inexplicable obsession with her finding the “Ideal Indian Husband.” Ugh. Dimple knows they must respect her principles on some level, though. If they truly believed she needed a husband right now, they wouldn’t have paid for her to attend a summer program for aspiring web developers…right? Rishi Patel is a hopeless romantic. So when his parents tell him that his future wife will be attending the same summer program as him—wherein he’ll have to woo her—he’s totally on board. Because as silly as it sounds to most people in his life, Rishi wants to be arranged, believes in the power of tradition, stability, and being a part of something much bigger than himself. The Shahs and Patels didn’t mean to start turning the wheels on this “suggested arrangement” so early in their children’s lives, but when they noticed them both gravitate toward the same summer program, they figured, Why not? 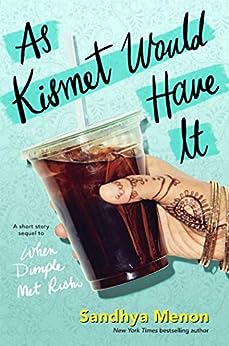 As Kismet Would Have It

Dimple Shah has a lot of opinions about marriage, but they boil down to this: It’s not for her. Sure, she loves her boyfriend, Rishi, but why does she need to validate that with an institution that has historically never favored the woman? Why go through all that hassle?Rishi Patel deeply disagrees. He believes in the power that comes with combining love and tradition, and when the time comes, wants nothing more than to honor those things in a huge celebration with his friends and family. He knows Dimple loves him, but in hearing her rant about how marriage is a “construct of hegemonic masculinity” for the millionth time, a small, niggling part of him worries that it’s not the institution of marriage Dimple has a problem with; maybe it’s him.The two lovebirds find themselves at a philosophical impasse. Can they find a way to work it out, or does kismet have other plans?

From Twinkle With Love

Aspiring filmmaker and wallflower Twinkle Mehra has stories she wants to tell and universes she wants to explore, if only the world would listen. So when fellow film geek Sahil Roy approaches her to direct a movie for the upcoming Summer Festival, Twinkle is all over it. The chance to publicly showcase her voice as a director? Dream come true. The fact that it gets her closer to her longtime crush, Neil Roy—a.k.a. Sahil’s twin brother? Dream come true x 2. When mystery man “N” begins emailing her, Twinkle is sure it’s Neil, finally ready to begin their happily-ever-after. The only slightly inconvenient problem is that, in the course of movie-making, she’s fallen madly in love with the irresistibly adorkable Sahil. Twinkle soon realizes that resistance is futile: The romance she’s got is not the one she’s scripted. But will it be enough?

You can also find Sandhya Menon’s work in these two short story collections!

Our Stories, Our Voices: 21 YA Authors Get Real About Injustice, Empowerment, and Growing Up Female in America