I love authors that I grew up thinking of as writers of “classics” and then I discover they’re still writing! Barbara Kingsolver is one of those authors, always talked about by my grandmother as a great writer, and she’s still publishing new work.

Here’s a look at her complete works.

How could two hardworking people do everything right in life, a woman asks, and end up destitute? Willa Knox and her husband followed all the rules as responsible parents and professionals, and have nothing to show for it but debts and an inherited brick house that is falling apart. The magazine where Willa worked has folded; the college where her husband had tenure has closed. Their dubious shelter is also the only option for a disabled father-in-law and an exasperating, free-spirited daughter. When the family’s one success story, an Ivy-educated son, is uprooted by tragedy he seems likely to join them, with dark complications of his own.

In another time, a troubled husband and public servant asks, How can a man tell the truth, and be reviled for it? A science teacher with a passion for honest investigation, Thatcher Greenwood finds himself under siege: his employer forbids him to speak of the exciting work just published by Charles Darwin. His young bride and social-climbing mother-in-law bristle at the risk of scandal, and dismiss his worries that their elegant house is unsound. In a village ostensibly founded as a benevolent Utopia, Thatcher wants only to honor his duties, but his friendships with a woman scientist and a renegade newspaper editor threaten to draw him into a vendetta with the town’s powerful men.

Flight Behavior is a brilliant and suspenseful novel set in present day Appalachia; a breathtaking parable of catastrophe and denial that explores how the complexities we inevitably encounter in life lead us to believe in our particular chosen truths. Kingsolver’s riveting story concerns a young wife and mother on a failing farm in rural Tennessee who experiences something she cannot explain, and how her discovery energizes various competing factions—religious leaders, climate scientists, environmentalists, politicians—trapping her in the center of the conflict and ultimately opening up her world. Flight Behavior is arguably Kingsolver’s must thrilling and accessible novel to date, and like so many other of her acclaimed works, represents contemporary American fiction at its finest.

The Poisonwood Bible is a story told by the wife and four daughters of Nathan Price, a fierce, evangelical Baptist who takes his family and mission to the Belgian Congo in 1959. They carry with them everything they believe they will need from home, but soon find that all of it—from garden seeds to Scripture—is calamitously transformed on African soil. What follows is a suspenseful epic of one family’s tragic undoing and remarkable reconstruction over the course of three decades in postcolonial Africa.

The novel is set against one of the most dramatic political chronicles of the twentieth century: the Congo’s fight for independence from Belgium, the murder of its first elected prime minister, the CIA coup to install his replacement, and the insidious progress of a world economic order that robs the fledgling African nation of its autonomy. Against this backdrop, Orleanna Price reconstructs the story of her evangelist husband’s part in the Western assault on Africa, a tale indelibly darkened by her own losses and unanswerable questions about her own culpability. Also narrating the story, by turns, are her four daughters—the self-centered, teenaged Rachel; shrewd adolescent twins Leah and Adah; and Ruth May, a prescient five-year-old. These sharply observant girls, who arrive in the Congo with racial preconceptions forged in 1950s Georgia, will be marked in surprisingly different ways by their father’s intractable mission, and by Africa itself. Ultimately each must strike her own separate path to salvation. Their passionately intertwined stories become a compelling exploration of moral risk and personal responsibility. 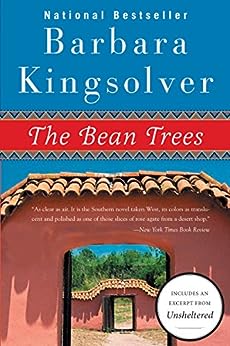 The Bean Trees is bestselling author Barbara Kingsolver’s first novel, now widely regarded as a modern classic. It is the charming, engrossing tale of rural Kentucky native Taylor Greer, who only wants to get away from her roots and avoid getting pregnant. She succeeds, but inherits a 3-year-old native-American little girl named Turtle along the way, and together, from Oklahoma to Tucson, Arizona, half-Cherokee Taylor and her charge search for a new life in the West.

Written with humor and pathos, this highly praised novel focuses on love and friendship, abandonment and belonging as Taylor, out of money and seemingly out of options, settles in dusty Tucson and begins working at Jesus Is Lord Used Tires while trying to make a life for herself and Turtle. 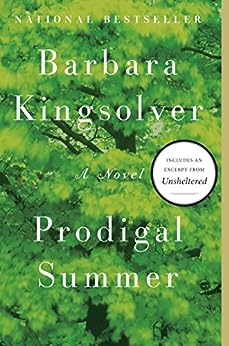 Barbara Kingsolver’s fifth novel is a hymn to wildness that celebrates the prodigal spirit of human nature, and of nature itself. It weaves together three stories of human love within a larger tapestry of lives amid the mountains and farms of southern Appalachia. Over the course of one humid summer, this novel’s intriguing protagonists face disparate predicaments but find connections to one another and to the flora and fauna with which they necessarily share a place. 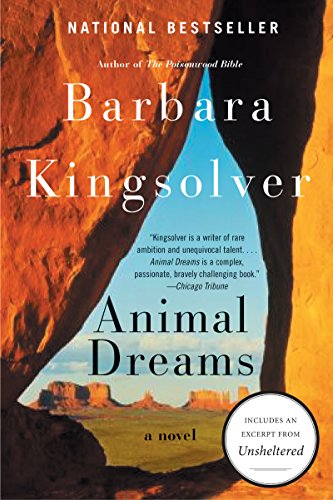 At the end of her rope, Codi Noline returns to her Arizona home to face her ailing father, with whom she has a difficult, distant relationship. There she meets handsome Apache trainman Loyd Peregrina, who tells her, “If you want sweet dreams, you’ve got to live a sweet life.” 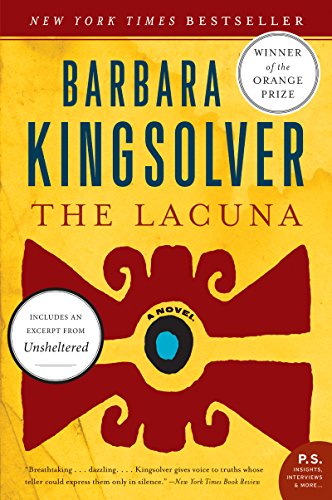 In The Lacuna, her first novel in nine years, Barbara Kingsolver, the acclaimed New York Timesbestselling author of The Poisonwood Bible and Animal, Vegetable, Miracle: A Year of Food Life, tells the story of Harrison William Shepherd, a man caught between two worlds—an unforgettable protagonist whose search for identity will take readers to the heart of the twentieth century’s most tumultuous events. 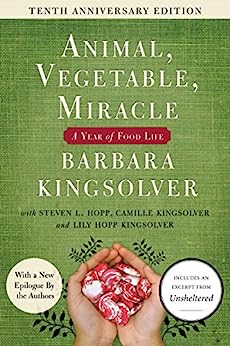 When Barbara Kingsolver and her family moved from suburban Arizona to rural Appalachia, they took on a new challenge: to spend a year on a locally-produced diet, paying close attention to the provenance of all they consume. Concerned about the environmental, social, and physical costs of American food culture, they hoped to recover what Barbara considers our nation’s lost appreciation for farms and the natural processes of food production. Since 2007, their scheme has evolved enormously. In this new edition, featuring an afterword composed by the entire Kingsolver family, Barbara’s husband, Steven, discusses how the project grew into a farm-to-table restaurant and community development project training young farmers in their area to move into sustainable food production. Camille writes about her decision to move back to a rural area after college, and how she and her husband incorporate their food values in their lives as they begin their new family. Lily, Barbara’s youngest daughter, writes about how growing up on a farm, in touch with natural processes and food chains, has shaped her life as a future environmental scientist. And Barbara writes about their sheep, and how they grew into her second vocation as a fiber artist, and reports on the enormous response they’ve received from other home-growers and local-food devotees.

Picking up where her modern classic The Bean Trees left off, Barbara Kingsolver’s bestselling Pigs in Heaven continues the tale of Turtle and Taylor Greer, a Native American girl and her adoptive mother who have settled in Tucson, Arizona, as they both try to overcome their difficult pasts.

Taking place three years after The Bean Trees, Taylor is now dating a musician named Jax and has officially adopted Turtle. But when a lawyer for the Cherokee Nation begins to investigate the adoption—their new life together begins to crumble. 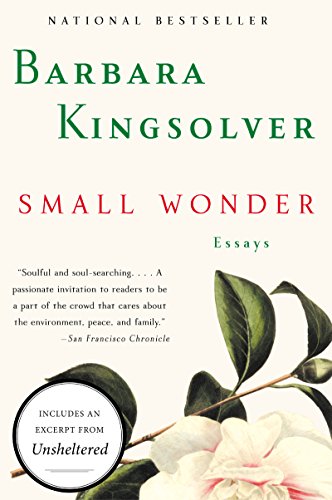 In her new essay collection, the beloved author of High Tide in Tucson brings to us out of one of history’s darker moments an extended love song to the world we still have. From its opening parable gleaned from recent news about a lost child saved in an astonishing way, the book moves on to consider a world of surprising and hopeful prospects, ranging from an inventive conservation scheme in a remote jungle to the backyard flock of chickens tended by the author’s small daughter.

Whether she is contemplating the Grand Canyon, her vegetable garden, motherhood, adolescence, genetic engineering, TV-watching, the history of civil rights, or the future of a nation founded on the best of all human impulses, these essays are grounded in the author’s belief that our largest problems have grown from the earth’s remotest corners as well as our own backyards, and that answers may lie in those places, too. In the voice Kingsolver’s readers have come to rely on—sometimes grave, occasionally hilarious, and ultimately persuasive—Small Wonder is a hopeful examination of the people we seem to be, and what we might yet make of ourselves. 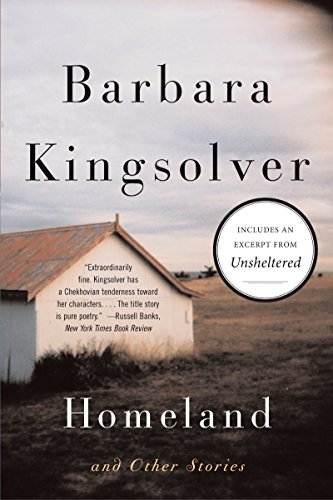 Homeland and Other Stories

In settings ranging from eastern Kentucky to northern California and the Caribbean island of St. Lucia, Barbara Kingsolver uses her distinctive voice and vast knowledge of human nature to address some of her favorite themes: the importance of personal and cultural heritage; how the past effects the present and the enduring power of love. Kingsolver’s characters, many single mothers, struggle to make sense of their lives and find meaning in a difficult world. 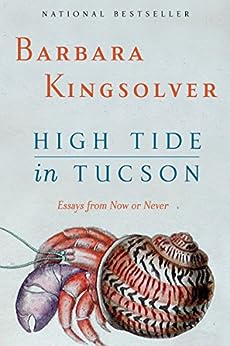 In High Tide in Tucson, she returnsto her familiar themes of family, community, the common good and the natural world. The title essay considers Buster, a hermit crab that accidentally stows away on Kingsolver’s return trip from the Bahamas to her desert home, and turns out to have manic-depressive tendencies. Buster is running around for all he’s worth — one can only presume it’s high tide in Tucson. Kingsolver brings a moral vision and refreshing sense of humor to subjects ranging from modern motherhood to the history of private property to the suspended citizenship of human beings in the Animal Kingdom.