OK, time to admit my bias. I love Michael Cunningham. I think The Hours is amazing. I took Cunningham’s advanced fiction writing course my senior spring. I had him write one of my grad school recommendation letters. I love this man. He’s brilliant and funny and an absolutely joy of a teacher, which is not that common for good writers, let me tell you. To celebrate the beginning of the school year, let’s take a look at his complete works.

In The Hours, Michael Cunningham, widely praised as one of the most gifted writers of his generation, draws inventively on the life and work of Virginia Woolf to tell the story of a group of contemporary characters struggling with the conflicting claims of love and inheritance, hope and despair. The narrative of Woolf’s last days before her suicide early in World War II counterpoints the fictional stories of Samuel, a famous poet whose life has been shadowed by his talented and troubled mother, and his lifelong friend Clarissa, who strives to forge a balanced and rewarding life in spite of the demands of friends, lovers, and family.

A Home at the End of the World

From Michael Cunningham, the Pulitzer Prize-winning author of The Hours, comes this widely praised novel of two boyhood friends: Jonathan, lonely, introspective, and unsure of himself; and Bobby, hip, dark, and inarticulate. In New York after college, Bobby moves in with Jonathan and his roommate, Clare, a veteran of the city’s erotic wars. Bobby and Clare fall in love, scuttling the plans of Jonathan, who is gay, to father Clare’s child. Then, when Clare and Bobby have a baby, the three move to a small house upstate to raise “their” child together and, with an odd friend, Alice, create a new kind of family.

In each section of Michael Cunningham’s bold new novel, his first since The Hours, we encounter the same group of characters: a young boy, a man, and a woman. “In the Machine” is a ghost story that takes place at the height of the industrial revolution as human beings confront the alienating realities of the new machine age. “The Children’s Crusade,” set in the early twenty-first century, plays with the conventions of the noir thriller as it tracks the pursuit of a terrorist band that is detonating bombs, seemingly at random, around the city. The third part, “Like Beauty,” evokes a New York 150 years into the future, when the city is all but overwhelmed by refugees from the first inhabited planet to be contacted by the people of Earth.

Presiding over each episode of this interrelated whole is the prophetic figure of the poet Walt Whitman, who promised his future readers, “It avails not, neither time or place . . . I am with you, and know how it is.” Specimen Days is a genre-bending, haunting, and transformative ode to life in our greatest city, and a meditation on the direction and meaning of America’s destiny. It is a work of surpassing power and beauty by one of the most original and daring writers at work today.

Peter and Rebecca Harris, midforties, are prosperous denizens of Manhattan. He’s an art dealer, she’s an editor. They live well. They have their troubles―their ebbing passions, their wayward daughter, and certain doubts about their careers―but they feel as though they’re happy. Happy enough. Until Rebecca’s much younger, look-alike brother, Ethan (known in the family as Mizzy, short for the Mistake), comes to visit. And after he arrives, nothing will ever be the same again.

A poisoned apple and a monkey’s paw with the power to change fate; a girl whose extraordinarily long hair causes catastrophe; a man with one human arm and one swan’s wing; and a house constructed of gumdrops and gingerbread. In A Wild Swan and Other Tales, the people and the talismans of lands far, far away―the mythic figures of our childhoods and the source of so much of our wonder―are transformed by Michael Cunningham into stories of sublime revelation.

Here are the moments that our fairy tales forgot or deliberately concealed: the years after a spell is broken, the rapturous instant of a miracle unexpectedly realized, or the fate of a prince only half cured of a curse. Reimagined by one of the most gifted storytellers of his generation, and exquisitely illustrated by Yuko Shimizu, rarely have our bedtime stories been this dark, this perverse, or this true.

It’s November 2004. Barrett Meeks, having lost love yet again, is walking through Central Park when he is inspired to look up at the sky; there he sees a pale, translucent light that seems to regard him in a distinctly godlike way. At the same time, in Brooklyn, Barrett’s older brother, Tyler, is struggling to make his way as a musician-and to write a wedding song for Beth, his wife-to-be, who is seriously ill. While Barrett turns unexpectedly to religion, Tyler grows increasingly convinced that only drugs can release his creative powers, and Beth tries to face mortality with as much courage as she can summon.
Michael Cunningham follows the Meeks brothers as each travels down a different path in his search for transcendence, demonstrating a singular understanding of what lies at the core of the human soul. Beautiful and heartbreaking, comic and tragic, The Snow Queen proves again that Cunningham is one of the great novelists of his generation.

Land’s End: A Walk in Provincetown

In this celebration of one of America’s oldest towns (incorporated in 1720), Michael Cunningham, author of the best-selling, Pulitzer Prize–winning The Hours, brings us Provincetown, one of the most idiosyncratic and extraordinary towns in the United States, perched on the sandy tip at the end of Cape Cod. 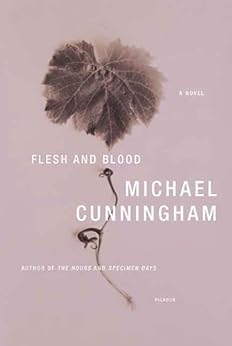 Following the Stassos family through four generations of ambition, love, violence, and change, a powerful narrative focuses on the turbulent lives of the Stassos children.

a home at the end of the world, author spotlight, michael cunningham, Spotlight, the hours