I’m going to get real biased here for a second. I love Crowley, as a writer and as a teacher. I first had him my senior fall for a class on Utopia, and then I had him as my senior thesis advisor, and so I’m kind of partial to his writing, but he’s got so much more than I’ve even read and another short story collection out now!

Reading John Crowley’s stories is to see almost-familiar lives running parallel to our own, secret histories that never quite happened, memories that might be real or might be invented. In the thirteen stories collected here, Crowley sets his imagination free to roam from a 20th century Shakespeare festival to spring break at a future Yale in his Edgar Award winning story “Spring Break”. And in the previously unpublished “Anosognosia” the world brought about by one John C.’s high-school accident may or may not exist.

John Crowley’s masterful Little, Big is the epic story of Smoky Barnable, an anonymous young man who travels by foot from the City to a place called Edgewood, not found on any map, to marry Daily Alice Drinkawater, as was prophesied. It is the story of four generations of a singular family, living in a house that is many houses on the magical border of an otherworld. It is a story of fantastic love and heartrending loss; of impossible things and unshakable destinies; and of the great Tale that envelops us all. It is a wonder.

Ka: Dar Oakley in the Ruin of Ymir

Dar Oakley—the first Crow in all of history with a name of his own—was born two thousand years ago. When a man learns his language, Dar finally gets the chance to tell his story. He begins his tale as a young man, and how he went down to the human underworld and got hold of the immortality meant for humans, long before Julius Caesar came into the Celtic lands; how he sailed West to America with the Irish monks searching for the Paradise of the Saints; and how he continuously went down into the land of the dead and returned. Through his adventures in Ka, the realm of Crows, and around the world, he found secrets that could change the humans’ entire way of life—and now may be the time to finally reveal them.

In a twilight land, two warring powers — the Reds and the Blacks — play out an ancient game of murder and betrayal. Then a Visitor from beyond the sky arrives to play a part in this dark and bloody pageant. From the moment he is found by two women who tend to the dead in the wake of battles, it is clear that the great game is to change at last.

It is the day after tomorrow, and society has been altered dramatically by experimentation that enables scientists to combine the genetic material of different species, mixing DNA of humans with animals. Loren Casaubon is an ethologist drawn into the political and social vortex that results with Leo — a creature both man and lion — at its center.

A young man named Rush That Speaks is growing up in a far distant world — one that only dimly remembers our own age, the wondrous age of the Angels, when men could fly. Now it is the “engine summer of the world,” and Rush goes in search of the Saints who can teach him to speak truthfully, and be immortal in the stories he tells. The immortality that awaits him, though, is one he could not have imagined. 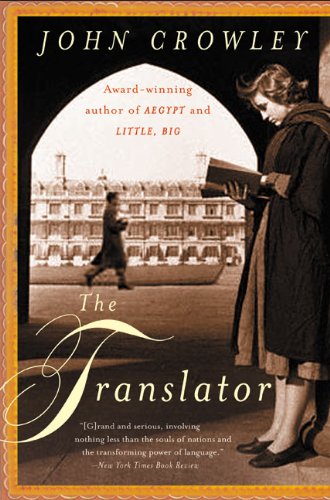 A novel of tremendous scope and beauty, The Translator tells of the relationship between an exiled Russian poet and his American translator during the Cuban missile crisis, a time when a writer’s words — especially forbidden ones — could be powerful enough to change the course of history.

A master literary stylist, John Crowley has carried readers to diverse and remarkable places in his award-winning, critically acclaimed novels – from his classic fable, Little, Big, to his New York TimesNotable Book, The Translator. Now, for the first time, all of his short fiction has been collected in one volume, demonstrating the scope, the vision, and the wonder of one of America’s greatest storytellers. Courage and achievement are celebrated and questioned, paradoxes examined, and human frailty appreciated in fifteen tales, at once lyrical and provocative, ranging fromthe fantastic to the achingly real. Be it a tale of an expulsion from Eden, a journey through time, the dreams of a failed writer, ora dead woman’s ambiguous legacy, each story in Novelties & Souvenirs is a glorious reading experience, offering delights to be savored . . . and remembered.

Pierce Moffett, an out-of-work teacher, and Rosie Rasmussen, a recent divorcee, are drawn to the house of Fellowes Kraft, an historical romance writer, and discover evidence of an alternate history

Documents discovered in a rotting old trunk in an English storage room prove that the manuscript of a novel by Byron once existed, and that it was saved from destruction, read, and annotated by Ada, Countess of Lovelace, a brilliant mathematician and Byron’s abandoned daughter, during the final, agonizing months of her young life. While the curious mystery of what became of the manuscript itself is explored, we are permitted to read it — the whole of Byron’s only novel — beginning to end.

And what a novel it is — a thrilling romance chock-full of treacheries and deceits, loves and fortunes gloriously gained and tragically lost; a tale of blood, vengeance, and mystery, of thrilling escapes and ruthless murder. Yet in the story of Ali — the bastard son of the demonic Lord Sane, torn from his life in high Albania to be raised a proper, if penniless, English gentleman — Ada finds gripping revelations of its author’s hidden character, and glimpses into the secrets of his soul. 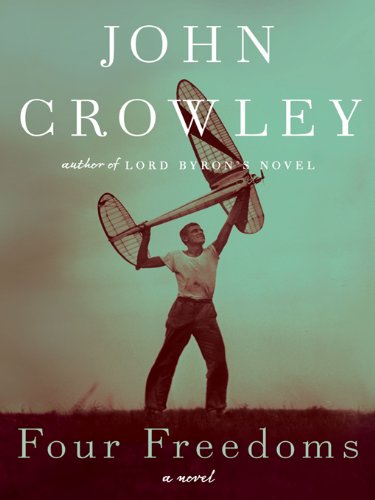 From the critically acclaimed author of Lord Byron’s Novel and The Translator comes a novel set in World War II America that follows the stories of a group of aircraft factory workers—in particular, the enigmatic figure of draftsman Prosper Olander. Named one of the Best Books of 2009 by the Washington Post, Four Freedoms is a beautifully crafted story of liberation and redemption from an author who has been compared to Robertson Davies, Thomas Mann, and Gabriel Garcia Marquez.