I discovered Monica Hesse when I read American Fire, which was one of my favorite books of the year, and I still recommend it. Then, I read The War Outside from my young adult literature course in graduate school and really enjoyed that too, so I guess now it’s time to read the rest of her books,huh?

It’s 1944, and World War II is raging across Europe and the Pacific. The war seemed far away from Margot in Iowa and Haruko in Colorado–until they were uprooted to dusty Texas, all because of the places their parents once called home: Germany and Japan.

Haruko and Margot meet at the high school in Crystal City, a “family internment camp” for those accused of colluding with the enemy. The teens discover that they are polar opposites in so many ways, except for one that seems to override all the others: the camp is changing them, day by day and piece by piece. Haruko finds herself consumed by fear for her soldier brother and distrust of her father, who she knows is keeping something from her. And Margot is doing everything she can to keep her family whole as her mother’s health deteriorates and her rational, patriotic father becomes a man who distrusts America and fraternizes with Nazis.

The arsons started on a cold November midnight and didn’t stop for months. Night after night, the people of Accomack County waited to see which building would burn down next, regarding each other at first with compassion, and later suspicion. Vigilante groups sprang up, patrolling the rural Virginia coast with cameras and camouflage. Volunteer firefighters slept at their stations. The arsonist seemed to target abandoned buildings, but local police were stretched too thin to surveil them all. Accomack was desolate―there were hundreds of abandoned buildings. And by the dozen they were burning.

Girl in the Blue Coat

Amsterdam, 1943. Hanneke spends her days procuring and delivering sought-after black market goods to paying customers, her nights hiding the true nature of her work from her concerned parents, and every waking moment mourning her boyfriend, who was killed on the Dutch front lines when the Germans invaded. She likes to think of her illegal work as a small act of rebellion.
On a routine delivery, a client asks Hanneke for help. Expecting to hear that Mrs. Janssen wants meat or kerosene, Hanneke is shocked by the older woman’s frantic plea to find a person–a Jewish teenager Mrs. Janssen had been hiding, who has vanished without a trace from a secret room. Hanneke initially wants nothing to do with such dangerous work, but is ultimately drawn into a web of mysteries and stunning revelations that lead her into the heart of the resistance, open her eyes to the horrors of the Nazi war machine, and compel her to take desperate action.
Beautifully written, intricately plotted, and meticulously researched, Girl in the Blue Coat is an extraordinary novel about bravery, grief, and love in impossible times. 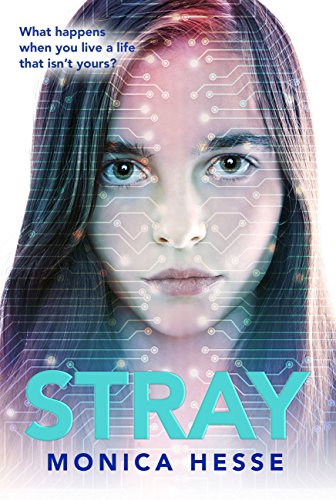 Lona Sixteen Always has spent most of her life as someone else. Part of a unique virtual reality experiment for troubled kids who have been “rescued” by the government, she spends twenty-three hours a day on the Path, reliving the decades-old, perfectly ordinary memories of a perfectly ordinary boy. Any other life is unimaginable–until one day someone appears on Lona’s screen who doesn’t belong: Fenn, a boy from her past, has returned to set her free.

Lona is wrenched brutally into an existence that is suddenly all her own, one that promises liberty and love, but also holds threatening secrets. And it turns out that there is a heavy price to pay for straying from her assigned path.

In Stray, Edgar-award winning master of suspense Monica Hesse brings us a richly imagined speculative world where there are no easy answers–and no easy way out.