If you like history and are a conservative, you’re going to want to read everything Craig Shirley has written.

In 1976, when Ronald Reagan lost his second bid for the GOP presidential nomination (the first was in 1968), most observers believed his political career was over. Yet one year later, at the annual Conservative Political Action Conference, Reagan sounded like a new man. He introduced conservatives to a “New Republican Party”—one that looked beyond the traditional country club and corporate boardroom base to embrace “the man and woman in the factories . . . the farmer . . . the cop on the beat. Our party,” Reagan said, “must be the party of the individual. It must not sell out the individual to cater to the group.”

But it was not only the former governor’s political philosophy that was changing. A new man was emerging as well: The angry anticommunist was evolving into a more reflective, thoughtful, hopeful, and more spiritual leader. Championing the individual at home, rejecting containment and détente abroad, and advocating for the defeat of Soviet communism, his appeal crossed party lines.

The election that changed everything: Craig Shirley’s masterful account of the 1980 presidential campaign reveals how a race judged “too close to call” as late as Election Day became a Reagan landslide―and altered the course of history.

His name in American politics is more cited than any other president. Both the Republican and Democratic parties are radically different today, mainly as a result of Ronald Reagan and the force of his ideas. No twentieth century president shaped the American political landscape so profoundly.

Craig Shirley’s Last Act is the important final chapter in the life of Reagan that no one has thus far covered. It’s the kind of book that widens our understanding of American history and of the presidency and the men who occupied it. To tell Reagan’s story, Craig has secured the complete, exclusive, and enthusiastic support of the Reagan Foundation and Library and spent considerable time there reviewing sealed files and confidential information.

Cast in a grand and compelling narrative style, Last Act contains interesting and heretofore untold anecdotes about Reagan, Mrs. Reagan, their pleasure at retirement, the onslaught of the awful Alzheimer’s and how he and Mrs. Reagan dealt with the diagnosis, the slow demise, the extensive plans for a state funeral, the outpouring from the nation, which stunned the political establishment, the Reagan legacy, and how his shadow looms more and more over the Republican Party, Washington, the culture of America, and the world.

In the days before the attack on Pearl Harbor, eyes in America were focused on the war in Europe or distracted by the elevated mood sweeping the country in the final days of the Great Depression. But when planes dropped out of a clear blue sky and bombed the American naval base and aerial targets in Hawaii, all of that changed. December 1941 takes readers into the moment-by-moment ordeal of a nation waking to war.

Best-selling author Craig Shirley celebrates the American spirit while reconstructing the events that called it to shine with rare and piercing light. By turns nostalgic and critical, he puts readers on the ground in the stir and the thick of the action. Relying on daily news reports from around the country and recently declassified government papers, Shirley sheds light on the crucial diplomatic exchanges leading up to the attack, the policies on internment of Japanese living in the U.S. after the assault, and the near-total overhaul of the U.S. economy for war.

Shirley paints a compelling portrait of pre-war American culture: the fashion, the celebrities, the pastimes. And his portrait of America at war is just as vivid: heroism, self-sacrifice, mass military enlistments, national unity and resolve, and the prodigious talents of Hollywood and Tin Pan Alley aimed at the Axis Powers, as well as the more troubling price-controls and rationing, federal economic takeover, and censorship.

December 1941 features surprising revelations, amusing anecdotes, and heart-wrenching stories, and also explores the unique religious and spiritual dimension of a culture under assault on the eve of Christmas. Before the attack on Pearl Harbor, the closest thing to war for the Americans was uncoordinated, mediocre war games in South Carolina. Less than thirty days later, by the end of December 1941, the nation was involved in a pitched battle for the preservation of its very way of life, a battle that would forever change the nation and the world.

Today’s political scene looks nothing like it did thirty years ago, and that is due mostly to Reagan’s monumental reshaping of the Republican party. What few people realize, however, is that Reagan’s revolution did not begin when he took office in 1980, but in his failed presidential challenge to Gerald Ford in 1975-1976. This is the remarkable story of that historic campaign-one that, as Reagan put it, turned a party of “pale pastels” into a national party of “bold colors.” Featuring interviews with a myriad of politicos, journalists, insiders, and observers, Craig Shirley relays intriguing, never-before-told anecdotes about Reagan, his staff, the campaign, the media, and the national parties and shows how Reagan, instead of following the lead of the ever-weakening Republican party, brought the party to him and almost single-handedly revived it.

Mary Ball Washington tells the story of one of the most controversial, unconventional and complicated women in American history and how she handled the contentious relationship with the firstborn son who would become the nation’s most revered Founding Father.

Mary Washington has been portrayed as everything from Mother Theresa to “Mommy Dearest.” The truth is somewhere in-between.

Craig Shirley uncovers startling details about the inner workings of the Washington family. He vividly brings to life a strong, resilient widow who raised six children and ran a large farm on her own at a time when women’s duties were relegated to household matters. He also shows that while Mary demonstrated admirable qualities that she passed down to her eldest son, she was also a woman who was stingy, selfish, and overbearing. Though she helped George become one of the world’s greatest leaders, Mary also tried many times to hold him back. A staunch British loyalist, Mary remained defiantly so—even as George led the successful rebellion against the crown. When he became the first president of the new United States, she refused to attend his inaugurations.

Throughout, Shirley compares and contrasts mother and son, illuminating the qualities they shared and the differences that divided them. A significant contribution to American history, Mary Ball Washington advances our understanding of the crucial relationship between George Washington and his mother, and offers fresh insight into this extraordinary figure who would shape our nation—and the woman who shaped him. 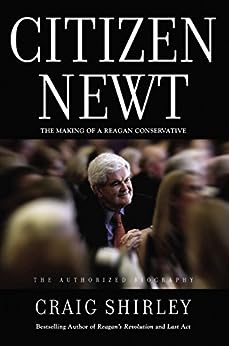 In one way or another Newt Gingrich has been leading a revolution for most of his life. Citizen Newt is the definitive account of that struggle. Writing with the full cooperation of Speaker Gingrich and the players around him, New York Times bestselling author Craig Shirley captures the events, ideas, failures, and successes of Newton Leroy Gingrich—one of the most complex, influential, and durable political figures of our time.

Returning to Gingrich’s childhood in Pennsylvania and his formative years as a young history professor, Citizen Newt moves through Gingrich’s first forays into politics and takes readers behind the scenes of the Congressman’s crucial role in the Reagan Revolution, his battles with George H. W. Bush and Bill Clinton, and his masterly orchestration of 1994s “Gingrich Revolution” and the Contract with America, which catapulted him to national prominence and forever changed congressional and national politics.

Drawing upon untold stories from Gingrich and those who know him best—political allies and opponents, Washington insiders and political iconoclasts, Capitol Hill staffers and colleagues—Shirley has crafted a fascinating, humorous, humanizing, and insightful account of a true American original.